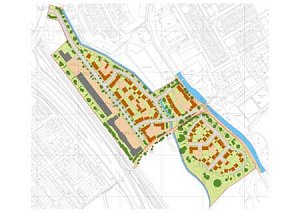 Sandwiched between the busy dual carriageway and the elevated Trent and Mersey Canal the commercial element of the site was located to act a buffer and acoustic barrier to the residential units to the North East of the site. 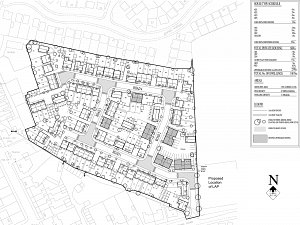 Commissioned by Bloor Homes to provide a residential urban design for the world famous Accrington Stanley ' Who are they?' Football Club Randle White developed a feasibility scheme, which enabled the developer to carry out cost assessment, and pre-planning application works.

As residential master planners we were able to quickly develop a concept idea and expand this to a 1:500 scale site layout drawing. The design parameters were set out by the Local Authority incorporating affordable housing provisions. 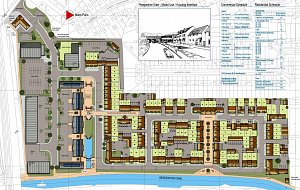 Commissioned by one of the North West's leading house developers to establish housing density figures and gain Local Authority feedback, Randle White were asked to carry out a feasibility study for this mixed use development in Salford.

The 4.5ha proposal included offices and industrial units supporting a new crèche and convenience store. The majority of the site is then given over to houses and apartments, with a mixture of detached, semi-detached, town houses and flats.


Located on the banks of the Bridgewater Canal the development introduces the canal back into the scheme in the form of flooded and dry locks, which also provide both Public Open space and a separation between the commercial and residential elements of the site.